By: Jennifer Matteo-Holtz|Published on: Mar 16, 2020|Categories: Stories Of Spirit| 0 comments

I had her pull 2 representative cards for her energy. Out of 2 decks a total of 156 cards  she picks The Queen of Cups twice. That is the Tarot Lottery Winner. Mrs D. pulls the same 2 Court Cards. Mind officially blown. WOW. Talk about Synchronictic soul energy galore.

Holy Hannah,  her emotional cups of heart energy over ran with tears of joy and release. She needed to fill up her heart with rememberance of all the love notes Mr D. left her on Valentine’s day and past occasions. Positive memories. Instead of the last day of death transition.

No Spirit wants you to remain in that memory with them in mind.  We should all let that go no matter how traumatic. That bag of heaviness wont allow your heart to hear messages from heaven.  As I connected with her husband (Mr.  D). I realized Mrs. D. Has been holding in lots of sadness and worry that her husband felt pain when passing from life Body  to Spirit. 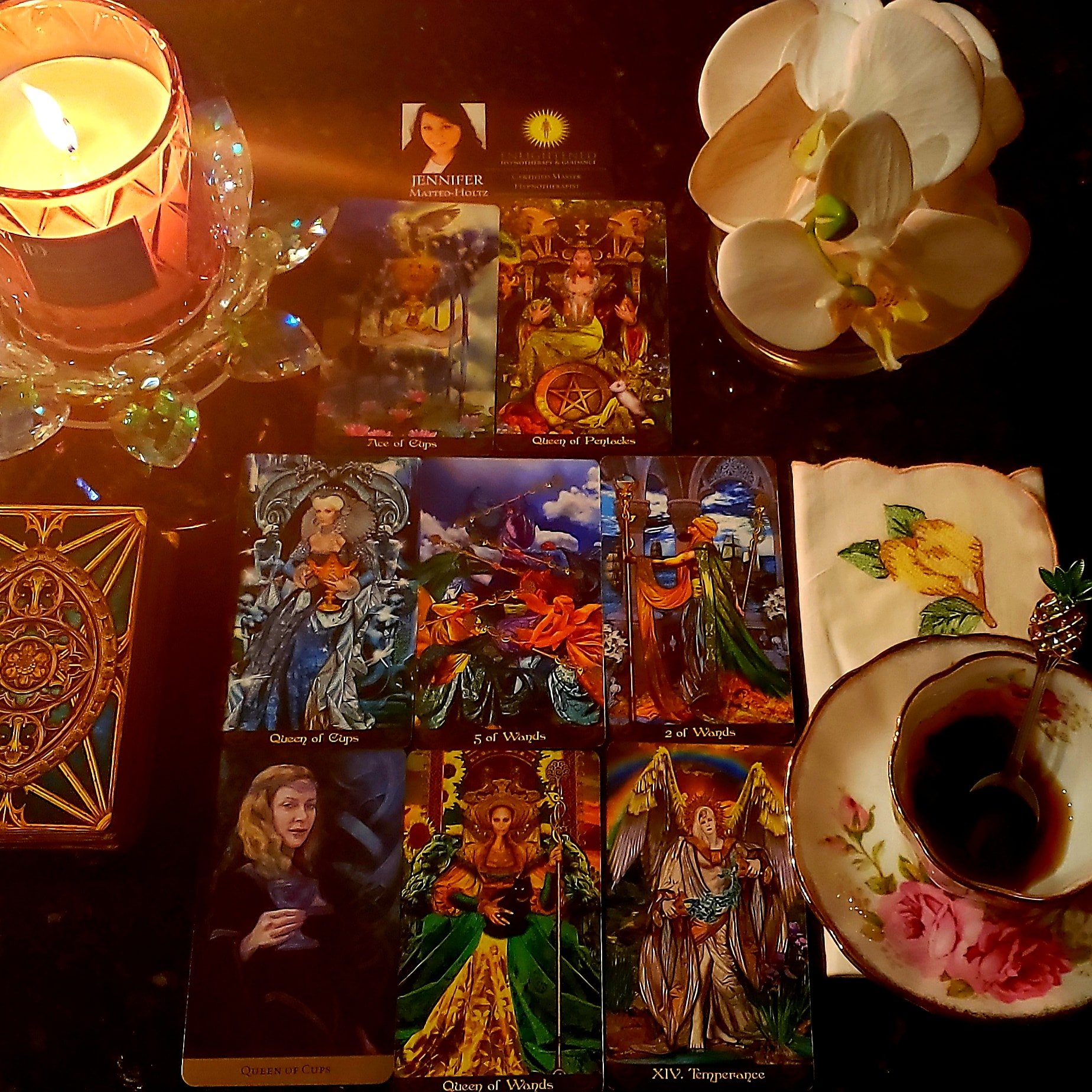 I could feel his sharp head pain a couple of times, and Mrs. D. confirmed he had unfortunately hit his head several times before transitioning to the Spirit Realm. I asked if he felt pain. No pain only the remembering of hitting the head. The rest was shown as very quick and over. Mrs. D. stated this was accurate!

I explained that death is the same as Birth. Simply a transition of our energy from one dimension  to another existence.
Death is much like birth. It can be painful, messy and there is usually lots of confusion and crying involved. However, no one ever asks a child if they remember the pain of birth, because it is not necessary.  The same is true for death. It is not necessary for a soul to feel or remember death transformation. They know it happened but they don’t dwell on it like we do. Celebrate your loved ones life and death. Be happy for them to be free from this experience we still dwell in daily. Thier life and thier essence blooms right in front of our eyes. After all, it is all life experiences to reflect on the persons power while they where here with us and remember their love eternally.
There were so many cool things that Mr. D.  brought through during our time together.

Mr. D showed me a light on the garage shutting off. Mr D. confirmed she had just replaced the batteries in the electrical door lock because it was burned out. Mr. D was with her when she did this task. He was very on top of taking care of the home front.

Mr. D. made me hungry with the smell of warm  chocolate chip cookies he always bakes for their beautiful grandchildren.  He would turn into a kid himself around the little ones. He was quite the chef in the kitchen and in the grill. He explained his  beef steaks are the best and his wife Mrs. D. has been missing his cooking.  Well she said, “They where the Best!”
Mr. D. showed me he had a way with seasonings.

Mr. D brought up the month of February and was adamant to explain he was definitely present for the grandchildren birthday in February. Even if they could not see him. He was there!

There where very specific ways Mr. D. expressed he would show Mrs. D.  his light energy is around her always. I will leave that out.

He gave me a visual tour of their beautiful home. I described it to a Tee! Since Mr. D. was a very detailed Spirit showing me everything necessary to give validation to Mr. D. since he new she would be aseptically. Mr. D is proud of the life they lived together the home they created and he is still present in their lives to this very moment and will be connected to his family in Spirit For Eternity.  Their oldest daughter and Mrs. D’s best friend where brought up to say thank you for helping his wife during the hard times. After all it was her beautiful best friend Mrs. M. that bought her this Mediumship Reading today. Mrs. D. would not normally come into see a person like me, and that’s ok. After today. I know Mrs. D. will keep in touch .

Mr D. even told he about the white flowers from his funeral that the family and Mrs .D. tired to keep alive. The flowers didn’t make it. They dried them and kept them. Mr. D got a kick out of this and had to poke a bit of fun at her….he joked. ” I died too. Glad they didn’t try to dry me out and save me”
Well kinda if you count cremains as the same thing. Just saying!!!

Oh my goodness Mr. D.  has a great sense of humor and it gave Mrs. D. more validation that her handsome and hilarious husband was still the same just in Light Body now.